If you’ve been struggling to get hold of some decent brake adjusters for your Series then you are not alone. The modern pattern ones made by Britpart, Bearmach etc may as well be made of cheese. However a set of genuine adjusters will set you back silly money and they are not as well made as they used to be.
When looking for a decent set of adjusters, remember that the same ones were common with many other 60s and 70s vehicles that used Girling back plates. I’ve managed to get hold of a batch of 1970s/80s new old stock pattern adjusters made by Moprod (remember them?), Moprod are now part of Quinton Hazell.
These fit a Series Landy fine and a far better than modern pattern parts.
I’ve got a limited amount of these that I am selling for £15 inc P&P within the UK, if you want one then let me know via the contact button above. 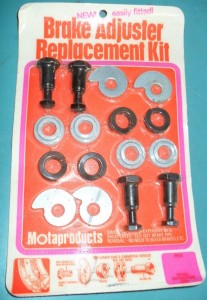 The 109 has been off the road for a while as it blew a seal in one of the front brake cylinders and due to me losing my usual brake bleeding assistant to baby duties it’s taken far longer then it should have done to get it sorted! I’ve never been able to use an Eezi-Bleed on the 109 as it has an odd sized reservoir cap and none of the Eezi-Bleed caps fit (even in the extension pack) so it’s always been a pain bleeding the brakes. The reservoir is an Autoplas one, no idea if it is original or not and I’ve decided to replace it with the correct Land-Rover one which my Eezi-Bleed will fit, making bleeding the brakes a one man job. 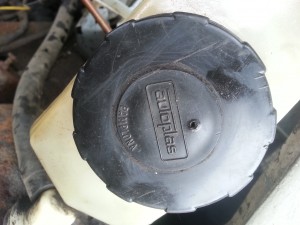 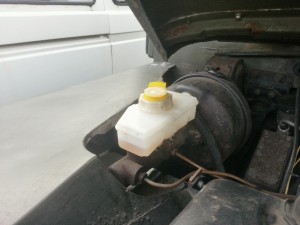 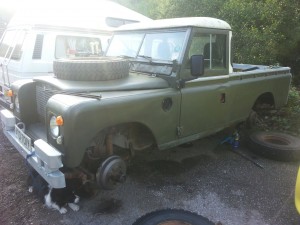 The reservoir was easy enough to replace, just tap out the two pins holding it in the cylinder and pull it out of the seals that it sits in. The new one came with two new seals so I cleaned the holes up and fitted the new seals and reservoir.

On stripping the font brakes down I realised I needed two new 11″ drums as they were quite badly scored so got a set of Mintex shoes from Paddocks along with two Drums (can’t remember the make but they aren’t Britpart and they are ok). Also needed to free up the adjusters as they were totally seized.. a couple of days soaking them in penetrating oil and eventually the freed up and are now working fine.

I’ve also changed the arrangement of the front two brake cylinders so the bleed nipple is on the top cylinder rather than the bottom, therefore in theory making it easier to get all the air out. Twin shoes are notoriously hard to bleed so I’m hoping this will make it a lot better. I managed to use the exisiting bottom to top brake pipe but had to make up a new one from the flexi down to the bottom cylinder. Just need to bleed them now.

In between finding time to finish my high ratio transfer box I have cleaned up the handbrake on the replacement gearbox that I will be fitting shortly. The handbrake drum was seized and very gunked up, the actuator and adjuster were also seized solid. 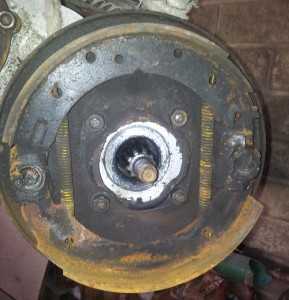 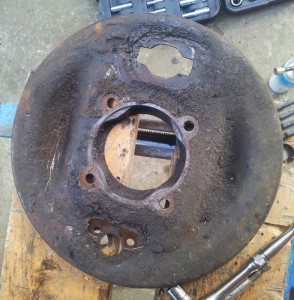 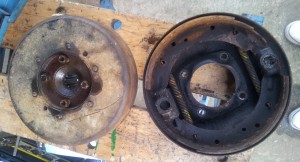 Using a knotted wheel on a 4.5″ angle grinder I cleanen up the drum and back plate and painted them both. I managed to unstick the calipers in the actuator and the adjuster and cleaned them up with a small wire wheel in a Dremel, I have greased the internals and they are now as good as new. 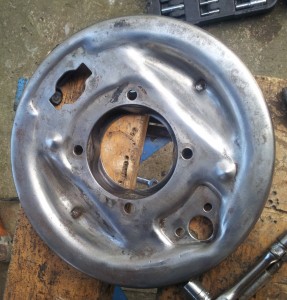 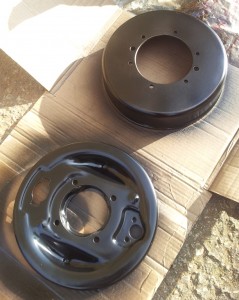 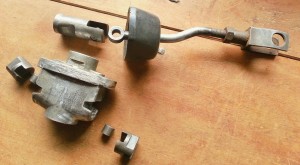 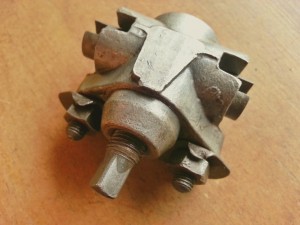 I have also cleaned up the output flange which has minimal wear and is ok to be reused. Sometimes the output flange can have a groove worn into them by the rear oil seal and this will lead to oil leaks as the seal cannot seal properly. If the flange is too worn then it should be replaced or you could fit a Speedi-Sleeve which is a thin walled sleeve that slides over the flange giving a level surface and they are cheaper than a new flange. 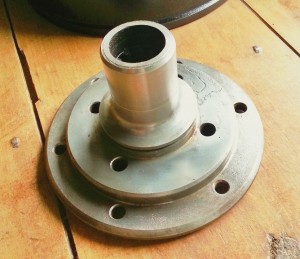 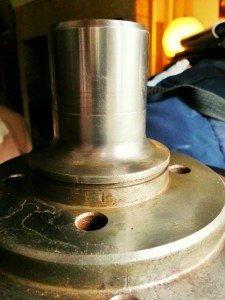 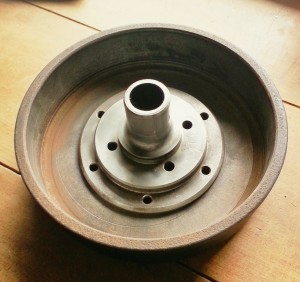 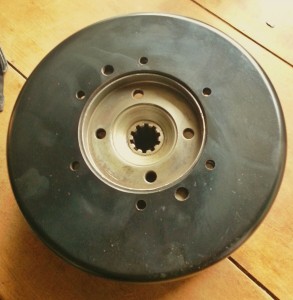 I’m happy with the result from an hours work – I’m now expecting a very effective and easily adjusted handbrake!