I was recently asked by the National Trust to replace the front door hinges on a Defender 300TDI 110 that is used on one of their nearby properties, so today I spent a couple of hours changing the hinges. The hinges on this model of Defender are exactly the same hinges that were used on my 1982 Series 3.

The drivers side door wouldn’t close on the latch as it had a lot of up/down play due to the hinges being very worn, turns out they were not the original hinges and have been replaced by Britpart hinges somewhere down the line – Britpart hinges are poor quality and have can have play in them from new! I managed to source a reasonably priced set of 4 genuine part hinges that I had to paint Coniston Green to match the 300TDI, the genuine hinges are much better quality. Below shows the old Britpart hinge on the left, new genuine on the right. 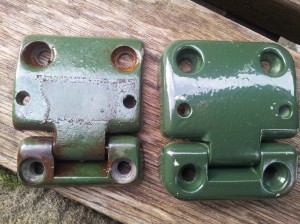 The hardest part of the job is removing the screws on the bulkhead side of the hinge as they tend to corrode and rust into the captive nuts in the bulkhead. If you are lucky they may just unscrew with a screwdriver but I’ve found usually they don’t. If they won’t budge with an impact screwdriver and you are reusing the hinge then you’ll need to drill out the head of the screw, then you can pull the hinge off and you’ll need to remove the remains of the screw and the captive nut from the bulkhead with some pliers, try not to let them drop into the bottom of the pillar as they will corrode down there and encourage corrosion in the pillar – if you do lose one inside the pillar use a magnet to retrieve it.

In my case I was replacing the hinges so I used a grinder to cut them off. The screws on the door side are much easier to remove as the nut is inside the door and tends not to be too rusty, remove the nut and screw will pull out. Once the old hinges are off it’s a straight forward job to put the new ones on. Fit new captive nuts, these are J-nuts with a hook that fits over the bulkhead as pictured below: 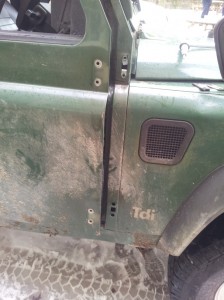 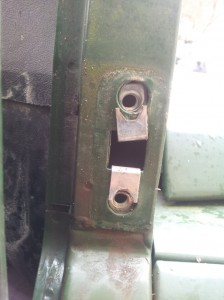 The hinges also have hard plastic gaskets that you should be able to reuse. There is quite a lot of room for adjustment of the door in the bulkhead side screws, attach the hinges and tighten the screws enough so they are tight but you can still move them about to adjust the hang of the door. I opened the window and held the door using the handle on the inside until it was sitting correctly then tightened up the screws with my other hand. The door now has no play and shuts and locks perfectly. The image below shows the top hinge with wing mirror attached. 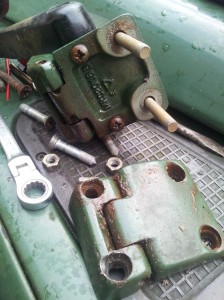