Everybody moans about the the lack of effective heating in a Series Land Rover, but there are some simple things you can do to make it better. I’ve only ever had a minimal amount of air coming up through the demisters, but a healthy amount coming from the dash vents and for a while I stuffed a sock in both dash vents to improve the demisting! The heater controls at the end of the dash have never made any difference to air flow.

When I finally got round to investigating all became clear once I removed the dash and removed the vinyl cover (see photos below). There are 15 or so tiny screws holding the top cover onto the tin dash and these tend to rust badly along with the rest of the dash so may have to be drilled out. Once i opened it up I could see the mechanism that directs the airflow to the dash vents or demisters was rusted solid. Also the cables that are supposed to control it were  rusted into their sleeves. This is a very common problem on the S3 dash and if your heater controls aren’t working then this is why. If you don’t get much in the way of airflow then check the corrugated pipe from the blower to the matrix as these split easily, there is also a foam seal between the matrix and bulkhead that could be missing or leaking, also a seal between the bulkhead and heater box in the dash. If they’re all ok then your dash is probably a rusty mess behind the vinyl cover!! when all these are in good order then the series heater fan should actually suffice.

Removing the dash is a simple process of unscrewing the screws around the outer edges but there are also 2 bolts at the back that are easy to miss. These screw into a captive nut in the bulkhead and can be difficult to remove as the nut tends to corrode and spin, have circled where they are in this photo: 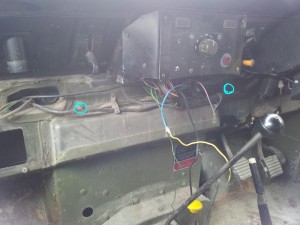 I managed to source a dashboard that was in better condition (tatty but no serious rust!). I stripped it down, wirebrushed as much surface rust off as possible and painted it in black hammerite. It’s not an amazing paint job but then nobody will see it anyway. I decided to remove the air diverter controls altogether as I’m not bothered about dash vents, only the demisters,so have blanked off the dash vents with some ally sheet that I had lying around. I’ll replace the covers so it looks correct.

Have got a new dash heater box to bulkhead seal gasket to fit (MTC6871) so there shouldn’t be any more air leaks. I’ve also bought 2 x new rubber gromits that the demister pipes fit into as the old ones were split (346785) 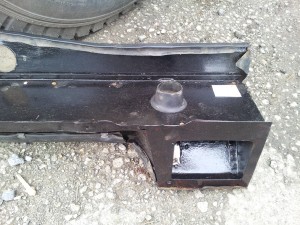 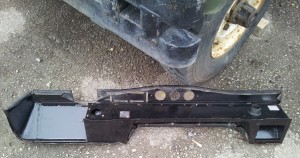 The dash end wiper motor cover was also badly corroded so found another on eBay cheaply, it’s the same part from the Series 3 dashboards right up to the TD5 Defenders so there are plenty about. I got a TD5 cover and it fits perfectly. 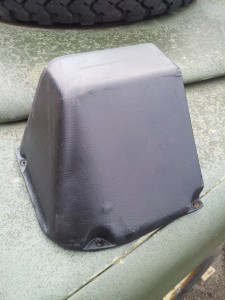 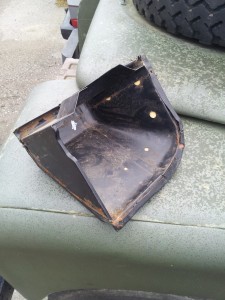 The dash is now back on the vehicle and the movement of air is more than enough, it’s not that far from my Octavia Estate so goes to show when the system is in good shape the standard heater system is ok.