Not long after I bought the Land Rover, when I still had the 2.25 petrol engine, I had a problem with excessive blue smoke, mainly after the engine had been idling for any amount of time. There’d be a significant amount of smoke which would clear as I drove off. I pulled the plugs and got the following result: 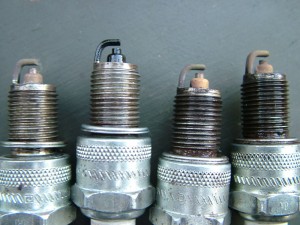 I thought it must be worn valve stem seals or a badly worn valve guide on no.3 cylinder due to that plug being so oiled up. The engine was also now starting to miss on no.3 due to the contamination of the spark plug. Compression test showed no unusual figures.

So I removed the head and had it crack tested, no cracks. I cleaned up the head and new genuine valve seals were installed (I bought Britpart first but the quality was very poor). I managed to replace the valve guides by using the drifts sold by Dingocroft (these are copies of Landrover special tools RO274400 for the inlet, can’t find the part number for the exhaust guide drift). I heated up the cylinder head on the stove and froze the guides for a couple of days before installing as they are obviously a very tight interference fit.

I also ported the head a little using a dremel, the 2.25 heads are quite rough and have a lot of casting imperfections that can be taken out, resulting in smoother running and a little more power.

Anyway, I replaced the head and the engine ran much smoother however the smoke was still there. Lots of head scratching ensued…so head off again. This time I cleaned the carbon off the tops of the pistons (doh I know…) and found a great big crack across no.3 that was not originally visible under the carbon:

I have no idea how it happened, the engine had genuine low miles at 39k. Can only think it must’ve been something to do with the previous owner using the landy to launch boats and some water had got in the intake. The other pistons weren’t great and were showing signs of similar wear so I bought a new set of AE from Dunsfold for £100 and installed them with new big end shells. Along with the work I’d done on the head, the engine ran beautifully for years on LPG up until I replaced it with a 200TDI.