The Land Rover came to me with a Lucas 25D distributor that was quite well worn and I suspect was causing some of the erratic running problems. I’d heard good things about ‘fit and forget’ electronic dizzys so I bought one of the cheap chinese Lucas copies from ‘simonbbc’ but I couldn’t get it to run right at all, in the end I put the 25D back on and it ran ok again so I sent the dizzy back as faulty. I’ve heard others have had no problems with these chinese dizzys, but I decided to spend a bit more and get a Pertronix kit that I bought from a US supplier through eBay. I also managed to pick up a new genuine Lucas 45D on eBay for £50. Very simple job to install the Pertronix kit into the dizzy. I set the timing using the static timing method with a test bulb and it fired up straight away. Never had a another problem with the ignition again till I changed to a diesel engine 20k later – well worth the cost. 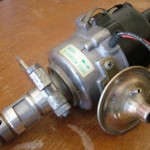 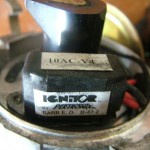