However Richard at www.glencoyne.co.uk has just discovered that the temperature senders that were fitted to the 200tdi Range Rover Classics are a direct fit but also a good match for the Series temp gauge. I have test fitted one and when the engine is fully hot the needle is just into the N mark. The part number is AMR1712 and looks the same as the Disco version but has a blue insulator. 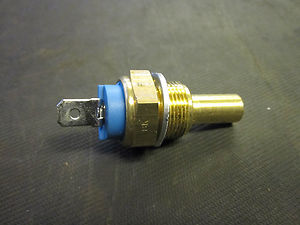